The 50 Dragons game comes with five reels and 50 pay lines. There are three rows in this title, which manages to offer a mix of Chinese folklore, mythology, and people interested in a lot of expensive products like gold jewellery. There are also costly stones placed on top of the reels. Even though the dragon symbol is undoubtedly the most valued on this title, there are other symbols like tigers, fish, peacocks, and more.

The ‘50’ within the terminology of this game is to do with the number of pay lines. Since these pay lines can be modified, it is better to make these changes before starting to play since the wins will be maximised as per the preference of a player. A player has multiple betting opportunities, as they can start from a minor some like 50p and go to £100. The bet per line is exceptionally flexible with options available from as low as 1p.

If a player makes a bet using one of 50 spins, they can land a jackpot worth around 1000 coins, as seen by this 50 dragons slot review. 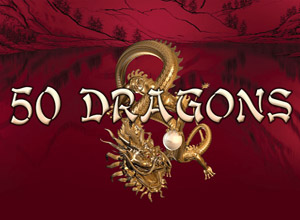 There is a handful of card playing symbols that are placed at the bottom of the paytable. These provide small returns that are just about sufficient to keep the game going. Even when five of a kind (Q, J, 10, and 9) occur, it only results in a return of 200 coins on each bet line. If just three occur, the returns are even more minimal with just ten on each bet line. The returns are slightly better if A or K appears on the reels. When five of these feature on the reels, it results in a 400x over the initial bet. Incidentally, the returns are the same if a player gets two special symbols – Golden bat and golden fish.

The Golden bat and golden fish come up with returns of 400X when five appear on the reels. If four of a kind comes up, it results in a return of 100X. The figure drops to 20x for three of a kind. A player may also get Golden Tiger or Rooster. Both symbols have the capacity to pay 500 times the bet when five of them appear on the reels. It drops down to 150x for 4 of a kind. If just three appear, it results in only a 40X return. An almost insignificant figure of 4x wins appears when two feature on the reels.

A very powerful regular symbol would be a golden dragon, which sits atop of the paytable. It also happens to be animated – one of a kind in this title – with some neat tricks available when winning combinations are formed. This symbol can pay up to 1000 times when five feature at once, while it drops down to 200X when four feature at the same time. If a player receives only three such symbols on the betting line, it results in a 40X return. Even when just two feature on the reels, a player would receive a 10X multiplier on their bet size on each line.

The game is primarily driven by a wild symbol, which is represented by a white pearl. It has the power to overcome every other symbol on the reel apart from the scatter symbol. The white pearl is almost as realistic since it features some intricate drawings, which have been designed to mimic a dragon’s paw. The paw uses gold elements in abundance so that its premium nature becomes apparent. It is possible to come up with a winning combination using the wild symbol, which can occur between the second and the fifth reels. All symbols can be replaced by this wild symbol apart from the scatter symbol, which is depicted by a golden ingot. Incidentally, the scatter symbol only has the power to come upon the first three reels from the left.

Once a player receives a scatter symbol, they have the freedom to open one of the most powerful features in the game – unrestrained free spins. A player will open up the free spins feature once they get three or more scatter symbols. Even though it sounds hard to initiate, this is not the case since this feature is triggered quite often. It is also possible to initiate another round of 50 dragons free spins – albeit limited to just five this time – from within the bonus feature. For this feature, a player needs to get an additional three or more occurrences of the scatter symbol within those ten free spins.

All messages regarding this game are displayed in gold letters. This makes it easy to keep track of all the information. Different coloured buttons can be used to activate pay lines, while these buttons also managed to function as anchor points so that winning combinations can be highlighted after each spin with coloured lines. Every player can choose lines from 1 to 50. The bet per line can also be adjusted from 0.02 to 4.00. If a player does not have the patience to go through all these changes, they can simply hit a ‘max bet’ button so that all pay lines are selected with the highest possible bet per line.

Players can also make the game spin on its own using an ‘autoplay’ feature, which will keep the game returning until a preset number of spins is reached. Every player should be aware that this autoplay feature consumes a lot of funds if the bet per line is set to maximum. It is necessary to lower this figure in case a player wants to capitalise on those bonus features. One can interrupt auto spins by hitting a stop button, which is displayed in a bright red colour.

An exciting element of this title would be a gamble feature, which lets players rapidly multiply their wins. It is possible to even quadruple wins by accurately picking card suit or colour that will come up next. This feature opens up only after a win. It is not recommended to gamble on any big wins, as the probability of success is just 50%. If a player only makes a small win, they might as well take the chance to make some meaningful return. The option of using this feature is entirely up to the player and all best 50 dragons tips would recommend choosing this option only for the big wins.

There are six playing cards in this game, but they do not stand out at any moment. A great deal of focus is spent on a stacked dragon symbol, which can provide multiple wins. This animated symbol can also do quick applause to a player who has just hit a winning combination. Aristocrat has focused heavily on retaining the oriental theme with background music that does not come as brash. A promise of a vast 1000 coins jackpot is given to players who can hit three dragon symbols at once. If five wild symbol is also achieved, players will receive 500 coins. There are also numerous smaller rewards for players to keep them engrossed even when they are about to hit big wins.

Furthermore, the game is available for access on smartphones, tablets, and desktop. All users with Android or iOS devices can access this title even if a dedicated 50 dragons mobile app is unavailable from an online gambling institution. The excellent payout offered by the game makes it possible for major online casinos to provide this title, which can be accessed in a free practice mode or with real money.

Advantages of this Slot 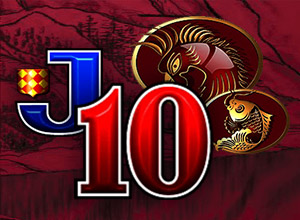 This 50 dragons slot machine is quite advantageous because of its free spins feature, which can be triggered. The added wild symbols further make a strong case for this slot. Aristocrat games do not tend to come with animated symbols, but its presence does give this title an upper hand compared with other titles from the same developer. The chance to keep finding some small wins to keep the bankroll going is positive, as it means a higher likelihood of coming up against a unique bonus feature. There is no certain requirement for players to put a sizeable budget into the game, as they can keep carrying with a small number of funds and still trigger such features. There are additional free rounds which can increase a player’s betting period, which can contribute to substantial cash prizes.

It is difficult to see players from numerous countries like USA, Australia, and Canada being unable to enjoy the game. In most cases, they are unable to meet the regulatory demands placed upon by this title. Hence, it makes these players at a disadvantage when it comes to trying their hand at the 50 dragons slot with real money. Even though there is a remarkable free spin, there is not much beyond this bonus. Players would make meagre returns in the base game so much so that other competing titles are significantly better in this regard.

It is a joyous feeling to get to play 50 dragons slot, as it can provide excellent gaming experience to everyone. It is not surprising that Aristocrat slot lovers brand this title as among the best from this developer. There are several captivating elements like a brilliant free spins feature, which can hand substantial rewards to a player. Yet, the lack of big wins in the base game means that a player is likely to be tired out by the time they hit the free spins. A player must have a strategy to retain some of the bankrolls so that it is available for bonus games. It would not be a surprise to see players picking up big wins.