Titanic Slot Review: Here’s A Breakdown To Get You Started 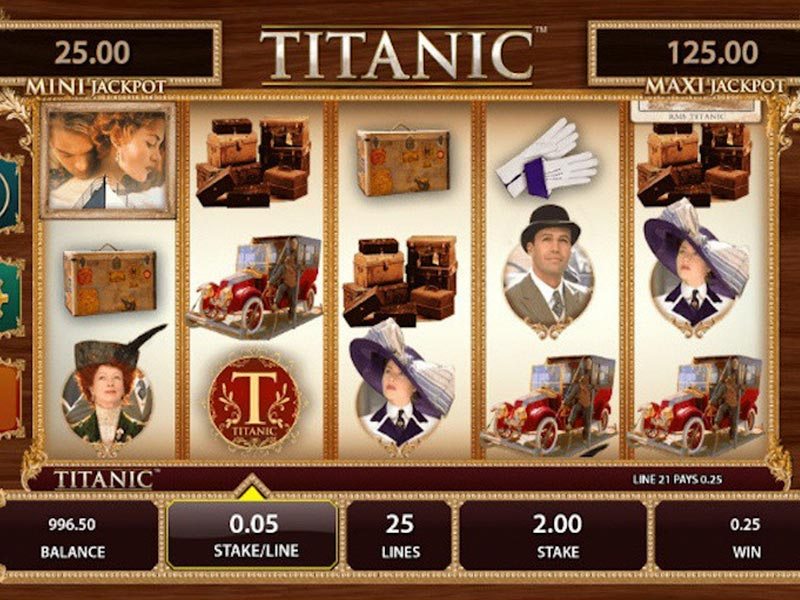 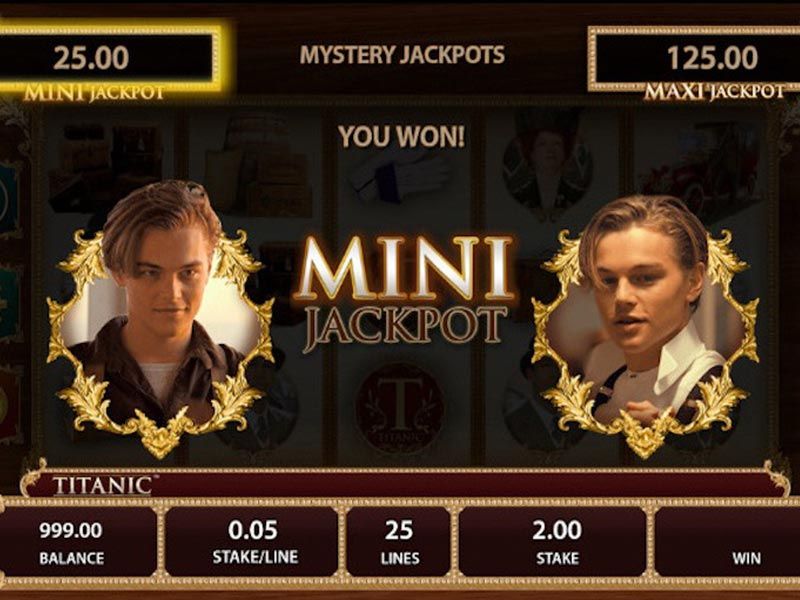 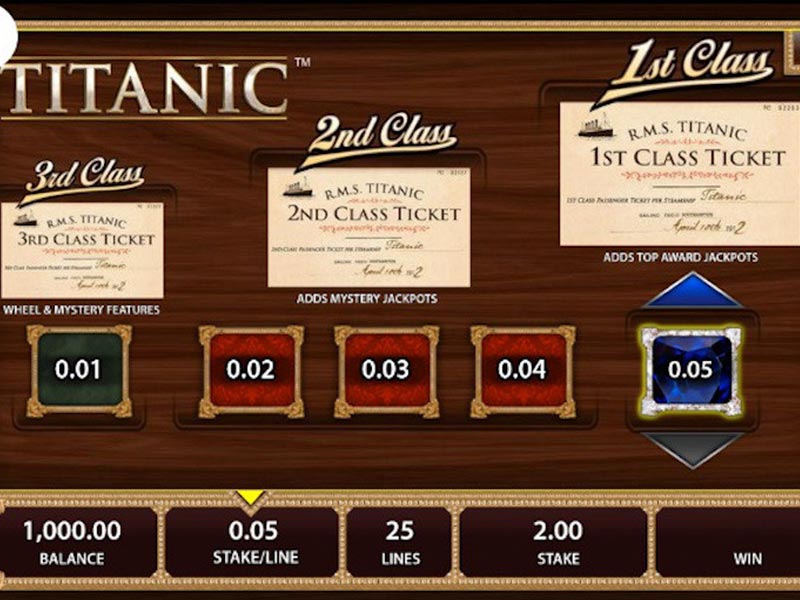 It is a straightforward slot that comes with a ton of features. The presence of 25 pay lines along with five reels makes it convenient in terms of modern slot setup, but Bally Technologies has done enough work to ensure that this game feels fresh and energetic. At the same time, there is also a vintage element, thanks to the slot’s theme. Due to copyright issues, a different soundtrack is selected as the theme. Many of the symbols will relate back to the movie, and it is not surprising considering that the game is based on this movie.

It is quite remarkable that one can play Titanic slot without coming across any usual card playing symbols. More often than not, these symbols have become a staple amongst slot games, but they convey a message of slackness and lack of creativity from the developer. Yet, there are no such symbols on this game. All 11 symbols have a great deal of individuality. 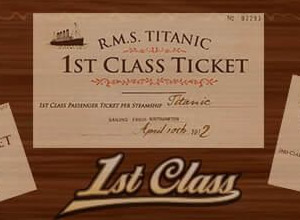 There are a handful of symbols – trunk box, a stack of cargo, and a pile of luggage – that occupy the lower end of the spectrum. They will start yielding returns even if just three features on the reels, but the returns are rather low with a maximum of just 0.30 times the stake. If five of these appear on the reels, it can result in 3x times the stake.

An old-fashioned flip-open clock is the next most valuable symbol alongside a pair of gloves and a vintage car. Interestingly, the car is almost identical to the vehicle that features in the actual movie. If five of these symbols are available on the reels, it can result in a 6X payout. It would be as low as 0.60x if only three are available.

This Titanic game also has a couple of high-value symbols, which are primarily handed out to the movie’s main characters. The lead character’s mother-in-law and her son are high-value symbols that payout 9x or 12x respectively, when five of them feature on the reels. Jack is the second highest paying symbol with returns of 18x when five appear on the reels. If only three are featured, it returns just 1.80x the stake. Titanic’s female lead, Kate Winslet, is the highest paying symbol alongside a red T symbol. Both are capable of returning 30x when five appear on the reels, while the returns are down to 2.40x when just three appear.

How to Play Titanic Slot Machine

The setup has been done cleanly, with most of the controls available on the left side of the screen. After being awarded an appropriate ticket, a player is directed to the game screen, where all legible fonts are used to display information like total balance, stake/line, and any wins. All controls are available on the left side. Interestingly, a player can change their ticket class at any time so that they need not worry about picking an expensive or an inexpensive ticket. An autoplay button is also provided where players can spin up to 50 times without interruption. Once again, there is flexibility in this regard with the option of going for 20 or 10 spins if a player is not comfortable with 50 autospins at one go.

Features of This Game

Here’s exactly what you need to know. Some exciting things can spice things up

Unlike other titles, the player is requested to choose their stake even before hitting the first spin. It is required because it opens up a jackpot feature, where players are awarded tickets – first class, second class, and third class – depending on their stake.

These jackpots are provided randomly, and a player is required to choose three tiles so that they can pick up cash awards.

This feature is awarded randomly, and it makes a player chose from 10 different question marks. A player will continue making choices until they have come across an equal amount. It is possible to come across a wild symbol during this feature. It can provide up to 2000 times the stake. The highest value is provided to a ‘drawing symbol,’ which also functions as a wild symbol.

A player is randomly awarded this feature, which places two wild reels on the plate. This feature also transforms scatter symbols into additional wilds, and this can lead to bigger wins.

A player can trigger this feature by getting three or more double wild ships, wild ships, or ship symbols. These should appear on the first, third, and fifth reels. Once these conditions are met, a player receives access to a Wheel of Fortune section that provides four different features:

It is one of the main features of this game. If it is triggered, a player is provided with ten titanic free spins. It can be used to multiply the stake by 50x to even 250x. All spins are played on a particular reel. Interestingly, the proximal plays a crucial factor since a special prize is provided when this symbol appears on the reel.

Heart of the Ocean

A player receives free spins that can range anywhere from 6 to 30. These are often provided with multipliers that range from 5X to 1x depending on the number of free spins. For example, a player receives a 5X multiplier if just six free spins are offered. This multiplier drops down to just 1x in the case of 30 free spins. If a player only manages ten spins, it results in a 3X multiplier. If there are 15 free spins on the table, the multiplier drops down to 2x. There are specific differences between the symbols. If a player gets a wild heart icon, all the symbols from right to left also get transformed into wild symbols.

A player will be making their way up a grid as they start picking up Titanic symbols. A player will be picking a T symbol from the crowd. It can contain two options – a credit prize or a multiplier. The round keeps progressing as long as a player continues to pick up credit prizes. Once a multiplier value is found, this Titanic slot review found that it turned out to be the conclusion of the round. 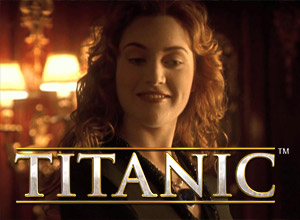 A player has to choose an option amongst ten safes, which are displayed on the screen. Each one has a different bonus value, and the initial credits will decide on potential wins. For this purpose, Titanic tips would recommend going with a maximum stake. Depending on a player’s luck, they will be rewarded multipliers and other prizes. A player might get multipliers that range from 150X to even 800x of their line bet.

Tips for Winning at Titanic Game

There are no dedicated ways to access this slot machine on Apple or Android devices through a Titanic mobile app. Just like many other slot titles, they are accessible only through browsers that will adapt to an individual device. This allows for excellent gaming experience irrespective of mobile availability. A player will get a similar level of experience regardless of their device – tablet, mobile, or PC. All it takes is a good Internet connection to have some fun.

The Titanic slot machine is available in a free play mode without using any credit card, signups, or other personal information. This mode can be utilized to provide personal excitement without risking real money. Many of the online casinos offer no deposit bonuses for their new players. It gives a great way to transition into a new institution with a new set of games. These no deposit bonuses can be used to enjoy this title, which has a plethora of bonus games that can confuse an average player. It is better to know these intricate games well before playing with real money.

Even though the Titanic slot machine will sound very confusing at first due to the sheer quantity of bonus games and features, it is rather interesting that it takes only a few minutes to learn. Everything has been constructed into a brilliant atmosphere that will help bring back memories of an iconic movie. Apart from focusing on just graphics and gameplay, the developers have also been sticking together a brilliant slot title that will elevate gaming experience to the next level. Even if a player has not experienced this movie, they will be quite happy with this adaptation, which has a vast number of features on-board. All these elements make this game a fantastic one.